Duns Motocross is based at Langton Lees Farm near Duns. Not far from the border with England, it is in a prime location and within striking distance for those travelling from far afield. There were a good number of Irish and English riders in attendance and a marvellous opportunity for some of the countries best riders to shine. The local riders renamed the track “Snuds” as it was being run backwards and it was a welcomed change as the feedback was positive. The great weather played a vital part over the weekend and the team were on hand to maintain it as required which made for some great racing. The Dalkeith Police came along on Sunday to show their support for the Off-Road community and joined in the action by helping the race start team. With the rise in motorcycle thefts, the Police wanted to share the pro-active work they have been doing with the riders and the community and listen to their feedback.

Jack Martin and Harris Curran would resume their championship battle at Duns but Cole Macauley proved he meant business making the trip over from Ireland. Jack Martin’s qualifying times were impressive, he was 4s ahead of Harris and 7s ahead of Cole but the Wulfsport sponsored rider’s day would be spoilt by the flying Irish lad. Jack blasted out the gate in the first race with the AMD Hole-shot and won easily but Cole would bag the next two races to set up a thrilling final race on the Sunday. Jack crashed on the second corner after getting the holeshot and by the time he got going again, he had to fight through the pack to get a 4th place in the final race. Cole easily won the final race and secured the overall. With Jack doing enough to bag second place, there was all to play for for the final podium. Harris Curran had a heavy crash in the 2nd race and had to have his bike lifted off him but he battled on and finished the race coming home in 9th. Hunter Haldane’s consistent riding and a great 2nd in the last race meant the final podium place was secured. Harris rode bravely on Sunday and his 3rd place in the final race was enough for an overall 4th. Liam Hannah had a solid weekend not far behind in 5th.

Aaron Todd turned fastest in qualifying into the overall win with a convincing performance. Alfie Lawrie pushed him all weekend but Todd just edged it with three wins to Alfie’s one. His three second places made for the overall second and the diminutive Lyall Rutherford would take the final podium. He did grab the first AMD Hole-shot and ran in front for sometime, but Todd and Lawrie would overhaul him. Still a great start to the season for the wee lad. Charlie Casseldon pipped Ethan Gawley by one point for the fourth place. Ethan did have a promising second race where he ran in second so there’s more to come from him this season.

Malachi Allan continued his domination of the 85 Small Wheel class with four confident wins. Jaden Anderson did his best to push Malachi with 2 AMD Holeshots but Allan was too strong. Robbie Scott was in the mix for overall second but Jaden’s solid riding kept him at bay. Cole Rennie and Alfie Stott had a ding dong battle all weekend and finished on equal points. Cole secured overall 4th on count back so Alfie had to settle for 5th.

The Big Wheel class saw some equally close racing as James McGowan beat Robbie McCullough by one point. McCullogh’s two race wins wasn’t enough as two thirds couldn’t overhaul McGowans win and three second places. Charlie MacDonalds final race win on the Sunday grabbed the final podium ahead of Aaron Tait but his performance paid dividends. He had hoped for a podium with a third and second in the first two races but two fourths limited his overall chances. Robbie Peace had four fifth places for the 5th overall.

Lennox Dickinson’s foray over to Scotland was a successful one. He dominated the Youth/Rookies race with four easy wins. Fellow Irish rider Charley Irwin’s party was spoilt by local lad Jack Fletcher. Riding in his first rookie season, he showed his 125 KTM was more than a match for the 250f bikes he was pitted against. Charley Irwin was well placed to capitalise on any mistakes but had to settle for the final podium. Kyle Peel’s two third places was enough to make sure he beat Lee Cameron into fifth by a single point.

The two stroke class had some of the most exciting racing on Saturday. The first race had to be red flagged after Jack Taylor took himself out with a heavy crash. Logan Hendry had a commanding lead in the first race until the race was red flagged. After the restart, Logan crashed heavily going into the second corner and this ultimately spoiled his intentions of wining the overall. The top six riders provided some entertaining racing for the crowds on Saturday as they diced for position. Ayden Smith showed his class by winning all three races but the other placings were hard fought as Steven Rennie’s rare race outing showed he could still run up front. Dylan Carnegie’s return to racing proved he’d not lost his speed by finishing third. George Stewart and Greg Maxwell traded places all day but George had the bragging rights. Steven Craig proved his CR125 could rip round any track and get to the front of the pack but a mechanical in race 2 spoiled his fun and that of the eager onlookers who love watching the 125 being ragged round the track.

The adult support gave a few of the main runners on Sunday a chance to bed themselves in. Ross ‘Bunga’ Rutherford made it look easy as he rode flawlessly. Adam Slavin enjoyed a run out as he did enough to secure overall second. Elaine Maceachern’s spirited riding earned her the final podium ahead of Seth Moir who’s two second places was enough for a 4th even though he sat out the last race as did Gregor Campbell who got some much needed bike time after his crash at Lochgilphead took him out for the weekend but he rode solidly and with two thirds he proved he was fit for MX2 on Sunday.

Niall Macauley spent Saturday chasing round track watching his son Cole racing in the Autos and he completed the double on Sunday by winning the Vets O40’s by a good margin. Brian Alexander pushed hard all day but couldn’t match the Irishman’s speed. Alan Deans rode well to secure the final podium place.

The o50’s was battled out by the usual suspects. Gordon ‘Montana’ Morrison always does his best to grab the AMD Hole-shots in whatever race he’s in and although he hit the start gate hard in race 3, he did enough to secure the overall. Ian Wilson and Morton Hannah fought for the second place and it was the 2019 World Vet Wilson that got the honour. Hannah, still getting to grips with his CRF after riding a 2 stroke CR for years got third overall. Paul Chiappa was in the mix in the main race and finished first in the o60’s ahead of Douglas Garrick.

The ‘C’s normally have a different winner every race as the racing is close but Louis Tobin won all three races on Sunday. He had to push through the pack in race 1 and only just caught the fast starting Dale Hynd as the AMD hole-shot specialist couldn’t secure the win. Considering it’s Dales’s first season back after a long lay off, he’s got more to come. Hynd was impressive with a 2,2,3 for overall second. Adam Curran did enough with his two thirds to hold off Matin Lyell by one point to land the final podium position.

The B class was another that was dominated by one rider. Myles Reid looked super smooth as he eased past the early front runners in each race. Riding with a back injury, he was able to gap the pack and stay in front in all three races. Jamie Clarke was desperate for a race win but couldn’t quite match Myles but held off Rory Johnson who also pushed every race. Ivan Kerr enjoyed the trip over from Ireland and was not far off the front runners. He did well to stay ahead of the rest of the pack as the tightly contested class is always hard fought.

Shaun Simpson proved he’s still the man to beat as he turned on the style in every race. No first corner crashes this time like Lochgilphead and he grabbed all three AMD hole-shots and lead every lap of every race. It was a bumper pay day for Simpson as he secured the bonus payout for doing so. It was a much needed workout for Shaun as he continues to race the Revo British Championship along with Billy Mackenzie who did try to push Simpson early in each race but would get passed by Ben Edwards who made a welcome return to racing the ScotMX Championship after winning the Carnegie Fuels MX1 class last year. Mackenzie got the final podium ahead of Ross ‘Bunga’ Rutherford although Ross did manage a third ahead of Billy in race 2. Aaron McCarroll has also recently returned to racing after a long lay off and showed he still has the speed to compete at a good level. The Chambers Racing rider improved each race and managed to overhaul Bunga in the last race. Bunga still finished ahead of McCarroll who ended up with a creditable overall 5th in MX1.

The Safe Access MX2 race saw Carlton Husbands first trek up north this season and it was a profitable one. He dominated the class and was in the mix with the MX1’s bikes in the combined race finished ahead of some of the big guns. Steven Craig was over a minute behind Husband in race 1 and Ayden Smith, riding in MX2, rode out of his skin to get the third place in race 1. He won the Youth/Rookies last season and showed he has bags of potential riding the fourstroke bike. Craig would end up with the overall second for the day with two 2nd places. Logan Hendry put the disappoint of his 2 stroke crash on the Saturday with a hard fought overall third riding hard and finishing only a few seconds behind Husband in race 3. The second place was enough to secure his place on the podium. Jack Arthur’s consistency meant he was able to finish ahead of Gregor Campbell as he put the disappointment of Lochgilphead behind him as Duns saw a return to form with a third in race 2.

Round 4 of the ScotMX Championship, powered by Milwaukee will be at Rhynie Motocross 11th / 12th June. Entries are open and available www.scotmx.com

Report and pictures by – MadMaxMedia 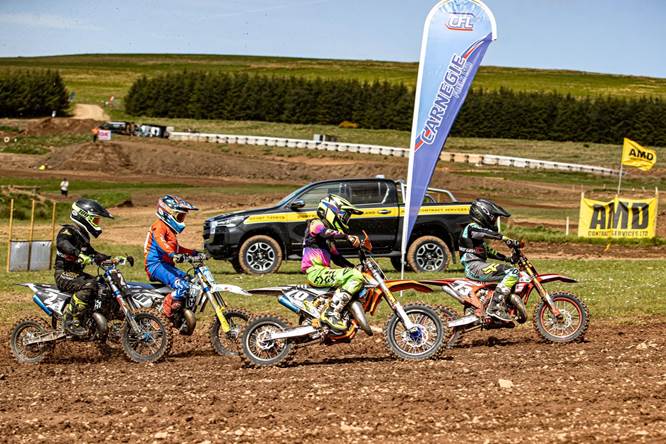 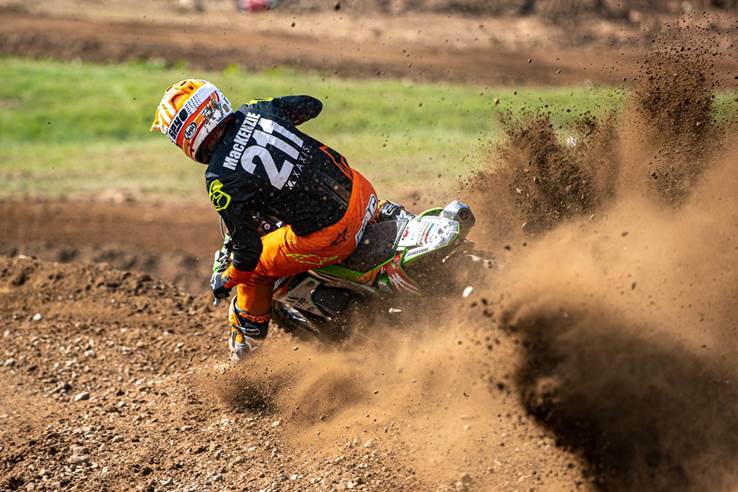 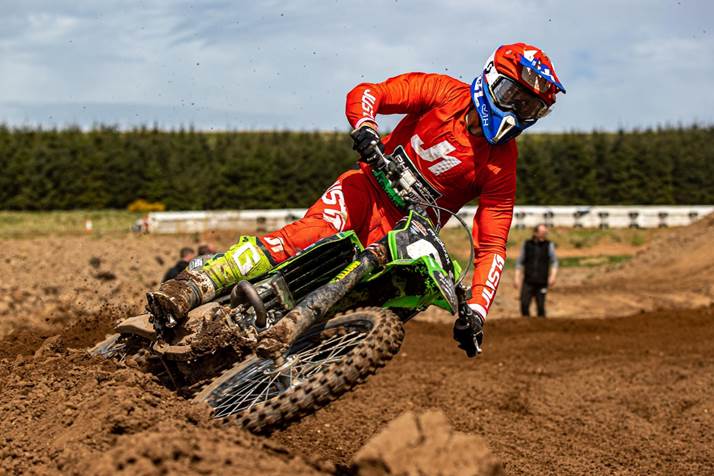 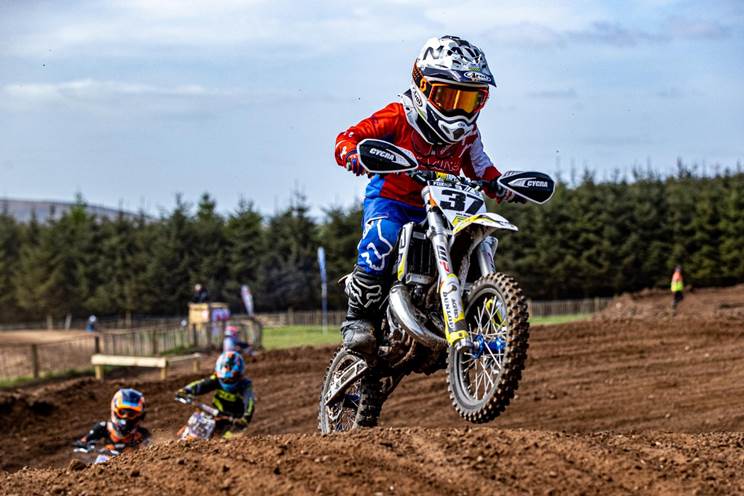 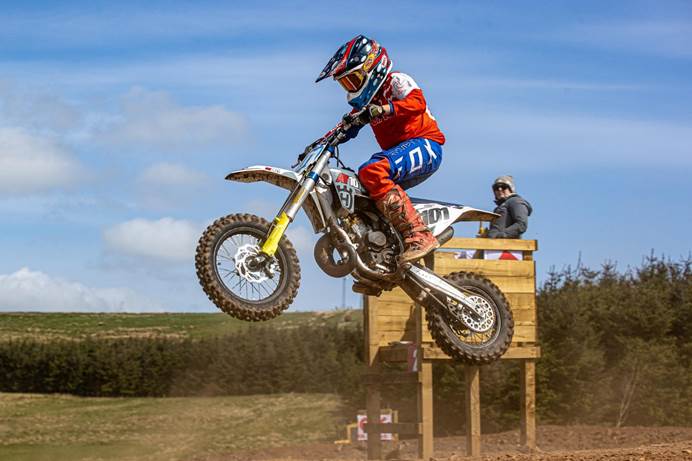 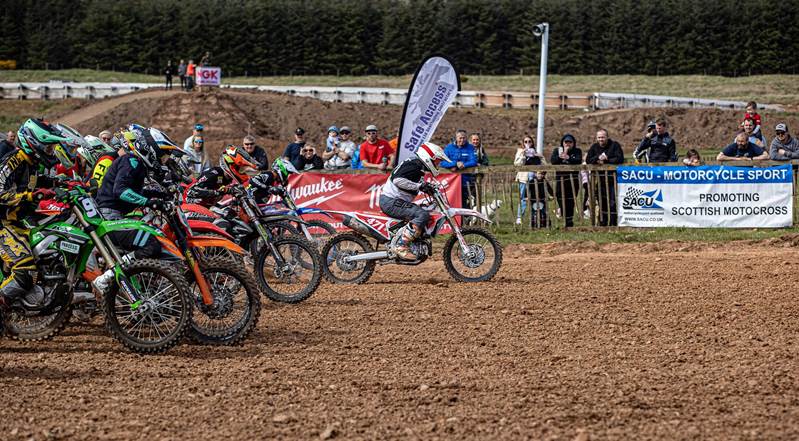