The old school hard pack track at Achnashelloch Farm, Lochgilphead has seen many fast and furious race meetings in years gone by and this weekend was no different. To win any championship, riders need to demonstrate their skills across a varied style of tracks and this would show who could ride hard pack after the deep sand of Tain at round 1. Lochgilphead is a few miles from the famous Kilmartin Track which saw the 250 Grand Prix visit in 1978. Located near the old iron age Dundadd Fort, the seat of Gaelic Kings (500-800AD), we would see who would be crowned King for a day as the riders would do battle.

The weather was favourable as the sun shone all weekend and the track conditions were perfect, credit to owner Stewart Campbell and his clan who worked hard to get it prepped. Stuart Flockhart and his ScotMX team, with the support of his growing list of sponsors including AMD Contract Services with the prestigious holeshot award pulled off yet another an amazing weekend.

Riders as young as 6 years old through to the age of 50+ battled for the holeshot award over 35+ races over the 2 days, for anyone not familiar with the holeshot term and what it represents, it is when the first rider of a field of up to 40 riders reaches a designated marker slightly after the first turn off the start of a race, this is known as taking the holeshot!

Traditionally, this day is all about the kids with an Adult support class making up the days race schedule.
The youth class winners were –

The ScotMX Championship, Powered by Milwaukee attracts some of the top talent in the country. As well as all the great youths that raced on the Saturday, it was the turn of the Adults to see who would be crowned winners. With the prospect of Martin Barr (MX1) and Lewis Hall (MX2) travelling from Northern Ireland and England respectively, they would be banging bars with some of Scotland’s finest.

The Adult class winners were

The next AMD Contract Services Holeshot sponsored Scottish championship motocross event will be the Youths at the loamy soil and technical circuit at Doune near Stirling on Saturday 10th July with the Adult championship running at the same Venue one week later on Saturday 17th July. 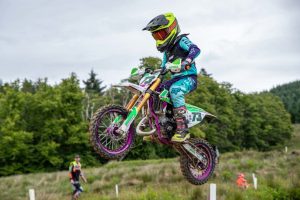 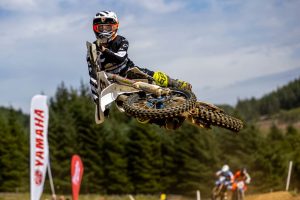 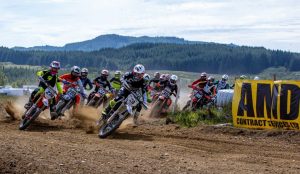 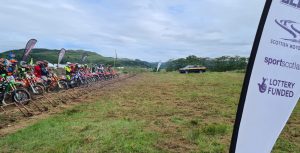