The fourth round of The ScotMX Scottish Championship, powered by Milwaukee, returned to the 2 day format after it was changed for Doune. The Rhynie track, north of Aberdeen, is the home of the Aberdeen and District Motocross club and always a popular track for any rider that has had the pleasure of racing there before. Fast and technical, it is a great test for all comers. The track team had worked hard to make sure conditions were perfect.

The weather on Saturday was a bit mixed with bright spells of sunshine in between rain showers. This didn’t affect the riders as they were too focused on making the most of the great track. The classes were busy and many riders had their eye on not just the win, but making sure they made the most of baking good championship points. With two rounds to go, it was a pivotable meeting to keep on track for the overall season.

Zak Hendry has had a great season so far and won all previous rounds, but he had his work cut out at his home track as Lyall Rutherford had other ideas. The diminutive rider grabbed the AMD hole shots and rode hard every lap as Zak pushed him all the way and nearly mugged him on the line in the first race as Lyall rolled off the gas before the line. Lyall did manage to gap the field in the subsequent races as he had his best result to date. Tucker Moffat had a solid weekend and managed a second place in the fourth race and got within 4 points of Zak to secure the final podium but Zak’s solid second overall was never in doubt.

Malachi Allan continued his dominance of the 65’s by winning all four races over the two days. Robbie Scott and Kyle Graham were split by two points as they both managed to finish 2nd in two races but Robbie edged Kyle out for the overall second. Kyle did get out the gate well, securing some great AMD hole shots but it wasn’t quite enough so he settled for a good third.

James had done enough though to get the final podium ahead of Jimmy Lindsay who had improved each race with two thirds in his last two races.

Jack Fletcher’s winning streak continued at Rhynie. Four no nonsense wins but Troy Flockhart did his best to run out front at times and blasted out the gate to take a brace of AMD Holeshots but Jack would eventually reel him in. Troy’s 3,2,2,2 gave him a comfortable second place. Ryan McKinney managed to beat Rhys Whyment by1 point to finish on the podium after Rhys had a big crash in the third race to spoil his overall chances.

Ayden Smith and Charley Irwin served up some great racing as the pair swapped first and second places all weekend. Ayden was on for three wins in a row but he hit the start gate in race three and had to battle through the entire field to secure the second place. Charley had the overall on count back by winning the last races, as the pair both finished on the same points. Great reward for the Irishman and it left Ayden thinking what could’ve been if he’d had a better start in race three. Lee Cameron had a solid weekend and three 3rd’s was enough to secure the final podium.

The weather was more favourable on Sunday as overnight rain meant the track was in prime condition for some no holds barred racing.

In the O40’s, Micky Graham and Lewis Farrow battled it out for the overall, but Lewis damaged his knee ligaments during race 2 which resulted in him pulling up mid race in race 3, only to re-join and do enough to bag the overall second. Micky Graham run out a well deserved winner but Lewis was lucky to be able to finish in the end. It was great watching the 125 two stroke run against the 450 four stroke. Alan Deans did enough to stay ahead of Paul Carey as the Irishman’s third in race 3 wasn’t enough to get him on the podium.

John Kenny proved his decision to race the ScotMX Championship was a good one. The fife rider got himself a new Husqvarna and after some local track set-up, won his very first race at the first attempt. The ‘C’ class is always a hard fought affair and it was no different at Rhynie. Kenny pushed through from 5th position into 1st in the first race and he won the third race which secured the overall win. Ross Bradley’s quick starts turned into the overall second but his day didn’t start off too well as a first corner crash meant he would have to fight through the pack in the first race and make sure he had two strong performances in the other two races. After the poor first race, he proved he was up to the challenge as he turned the AMD hole shots into podiums. After many ferries back and forth from Northern Ireland, throughout the season, Josh Rea’s hard work was rewarded with the final podium as the Irishman finally turned the miles into smiles.

Josh Gray got out the gate in race 1 grabbing the AMD hole shot and it looked like that would set the tone for the day as he won race one easily. Rusty Robertson, undaunted by his second in race 1, would win the next two races to take the top step comfortably. Josh didn’t make it easy for himself with a poor second race but redeemed himself in the final race with a third which was enough to finish ahead of Ivan Williamson who turned up the heat with an AMD hole shot and a great second place in race three for the overall third on the podium. Ivan finished on the same points as Niall Mcauley but Ivan took the podium with the better last race result. No trophy for the consistent Irishman at this meeting.

In the Carnegie Fuels MX1, Tony Craig wasted no time picking up where he left off at Doune. He rode tree faultless races as he turned the three AMD hole shots into easy wins. He looked like he meant business in practice and it was a workman like display as he secured the red plate for the championship. With a few notable riders missing, it was an opportunity for the riders in attendance to make up some places in the championship. Ryan Maclean had a better time of it at Rhynie as he managed to reset himself after a challenging race in race 1 and rode well to stay ahead of the pack and secure two thirds for the third overall. It was a lonely three races for the experienced vet, Richard Mckeown as he gapped the rest of the field but couldn’t catch Craig. He showed he still had the speed and style to adapt to any track as he rode hard for the second overall.

The Safe Access MX2 race was frantic at times as Ben Kennedy found himself racing the MX1 bikes to show them he meant business in his first full season after moving up from the rookies. He caught Ryan MacLean in race 1 and finished third in the race but first in his class. The rest of the MX2 riders would also do battle with the MX1 bikes and Steven Craig found himself was some way back from Ben Kennedy but still had three creditable races finishing second on the podium and now takes the red plate as he leads the championship in the Safe Access MX2. Jack Arthur finally got some reward for a tough season as he wrestled his Suzuki into third overall.

Round 5 of the ScotMX Scottish Championship, Powered by Milwaukee, will continue on 4th / 5th September at Woodside MX track, Elgin .

Be sure to Follow ScotMX on Facebook/Instagram for all your regular updates ! 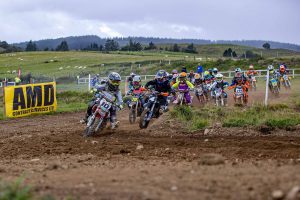 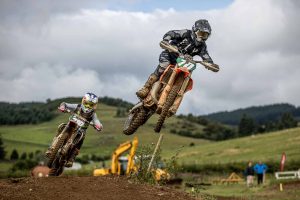 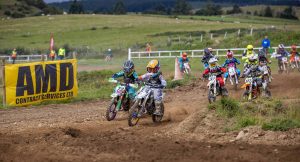 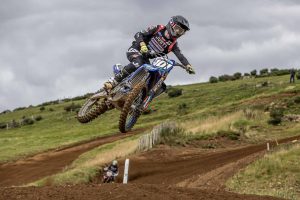