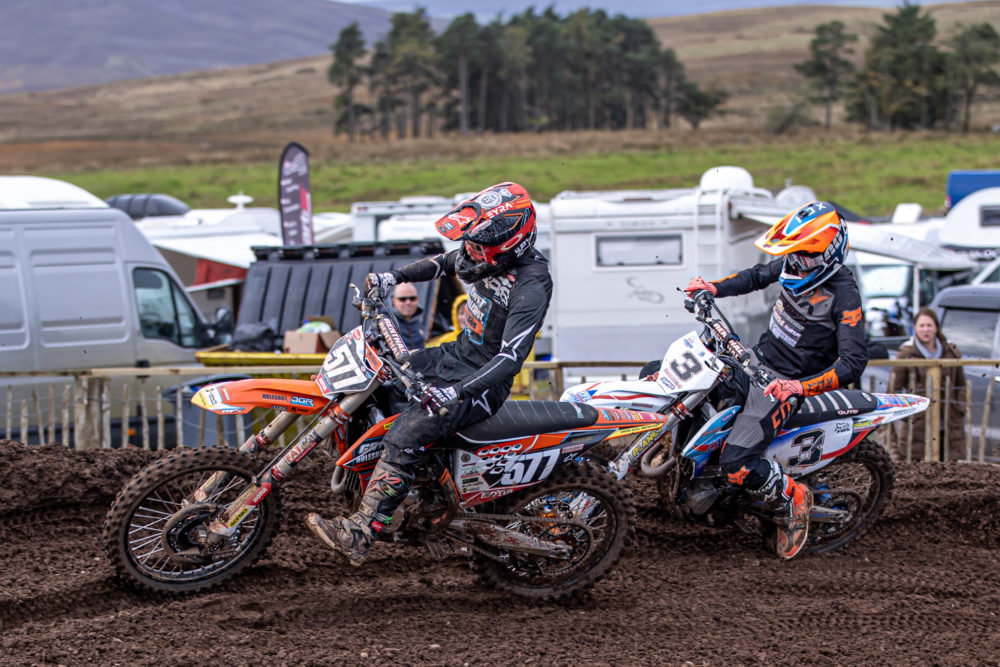 The final round of the 2021 ScotMX Scottish Championship, powered by Milwaukee and ran for the Scottish Auto Cycle Union, was held at Duns Motocross the scene of many great race meetings, and with a few championship classes to be decided, it would play its part.

The track was the opposite of the previous round as the deep fluffy sand of Elgin was replaced with clay hard pack and some wet Borders mud thrown in for good measure. All riders received gifts at signing on with some even lucky enough to take away a nice new Milwaukee Tools product!

Zak Hendry looked like he would stroll the last race meeting as he was 22 points coming to Duns. Lyall Rutherford had been making a late championship push and he needed 4 race wins to give himself a chance. He took the race win on Saturday morning with Zak pushing him all the way. Race 2 saw a cruel twist of fate as Zak’s bike gremlins returned after experiencing a DNF at Elgin and it would put him out for the weekend as Lyall kept up the pressure with another race win. Caleb Shearer and Tucker Moffat both had a consistent weekend but Tucker couldn’t catch Caleb in the third race as they both had crashes but Caleb rallied from dropping to 7th back to 2nd as Tucker rode from the back of the pack up to 6th. It was enough to secure the final podium of the weekend behind Caleb. Lyall’s final race on Sunday was a nervy one. He knew he needed to win to match Zak’s championship total when the dropper round points were brought into play , and Tucker pushed him all the way every lap. Lyall crossed the line just ahead of Moffat and tied Zak for the championship. It was down to the timing crew to work out who had won. Meantime, Jack Heath secured 4th just ahead of Cole MacAuley as they both had solid rides. Jack Martin finished on the same tally as Cole but lost out on final race position. A great first outing for the local lad. After much deliberation, Lyall Rutherford was named as ScotMX Auto’s Scottish Champion. With more race wins to his name through the season, he edged the win over Zak Hendry who was desperately unlucky not to win due to his DNF. 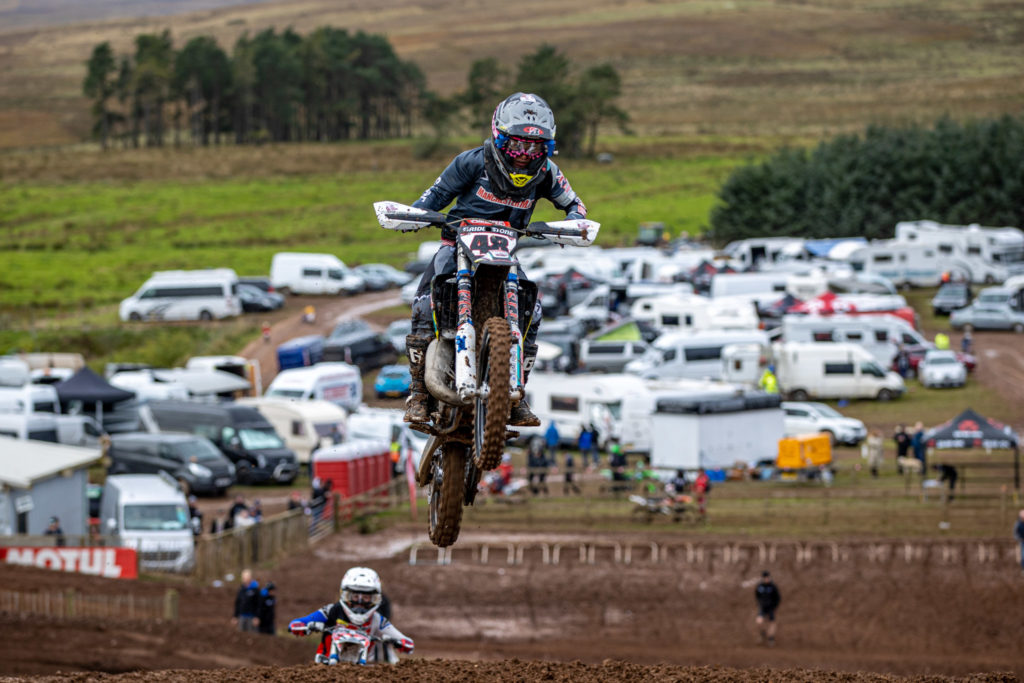 Malachi Allan had already secured the championship before Duns and Ollie Holland made the journey to Duns to give Malachi a run for his money. Ollie grabbed the best time in qualifying and tuned that into two narrow race wins on Saturday. When the going got tough in race three, Malachi showed he was still the one to beat and he won the race easily. With all to play for in the overall, Malachi won with the narrowest of margins as he crossed the line barely ahead of Ollie to secure the overall with the better last race. Kyle Graham rounded off the podium places with a comfortable overall third. His two thirds on Saturday set him up for the result. Ryan Jackson improved every race which ended with a good third in the final race. Kian McGill was able to borrow a bike to make sure he finished in the top 6 as his best race saw him finish in third last race on Saturday. Ricky Barrack battled all weekend and his consistency got him the sixth overall. Malachi Allan was named as ScotMX 65’s Scottish Champion.

Hayden Statt returned to race the ScotMX championship after only previously riding at the first round in Tain. He bettered his 2nd place there with the overall win ahead of Lewis Spratt, who ended the weekend riding one of Hayden’s spare bikes as his race bike developed a problem. Fortunately for Lewis, the spare bike got him over the line ahead of Jaden Anderson as the pair battled for the championship. Hayden’s dominance over the weekend saw him place 1,1,1,2 only beaten by Alfie Heron in the final race. Alfie’s poor third race meant Robbie Scott would grab fourth by one point. Alfie Stott’s solid riding was enough to secure the final top six position. As Lewis and Jaden battled in the final race behind Alfie and Hayden, it certainly got the crowd going as they crossed the line together before Jaden crashed after the chequered flag. Luckily, no harm done as Lewis had done enough to secure the ScotMX 85 Small Wheel Championship. 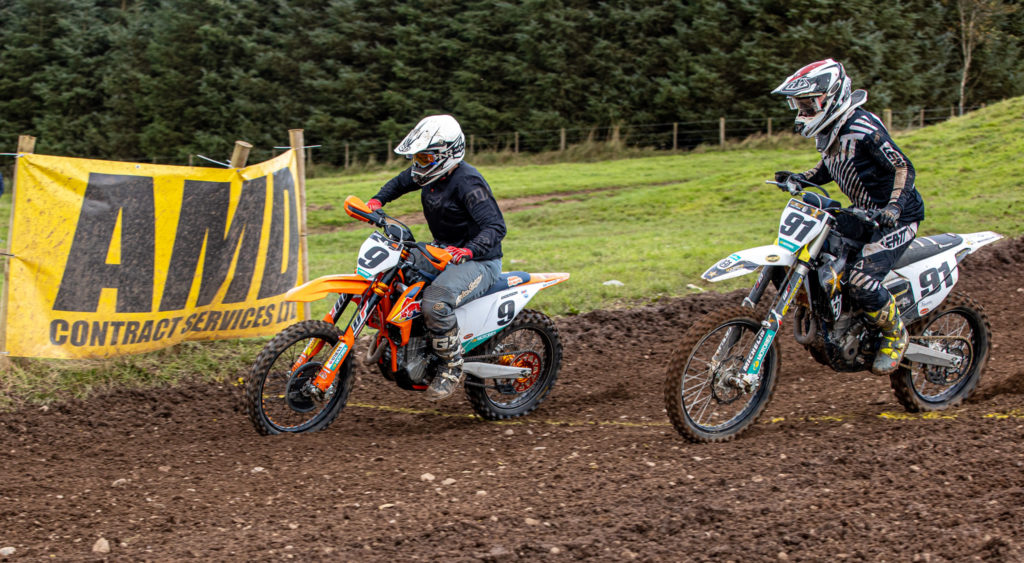 With the top 3 riders missing in the 85BW class, it gave the rest of the pack the chance to bag an overall. Charlie Macdonald grabbed the opportunity and rode faultlessly all weekend. Four race wins ahead of the improving Harrison Byers. He had shown progress every meeting and Duns gave him a second overall and the prize for most improved rider over the season. Glen Rollo rounded out the podium places and even managed a second place in the third race. Harry Nunn had his best result of the season with the fourth place. Drew Leslie and Dylan Hamer completed the top six positions. As the presentations were being made, Jack Fletcher arrived just in time to raise his trophy high to the cheers of the crowd. The diminutive rider winning back to back championships and moving to 125 for next season.

With Ayden Smith and Charley Irwin all set to battle out the championship, Kyle Peel turned up to ruin the party. Fresh from riding the bLUcRU FIM Cup in Mantova, Italy, Charley had high hopes for finishing off the season on a high. Ayden Smith was leading the championship after Elgin and had to do enough to keep his lead intact. Charley qualified just under a second ahead of Ayden, but it was Kyle Peel who won the first two races on Saturday ahead of Ayden. Logan Ferguson had some spirited riding at the weekend and bagged the final race win on Sunday. Charley pushed Logan all the way in the final race as Kyle passed Ayden mid race. Ayden was mindful he just needed the top four to win the championship so did not take any risks. No champagne for Charley as he crossed the line as it was Ayden who was sprayed with fizz after he came to a stop. Ayden Smith was crowned ScotMX Youth/Rookies Champion. 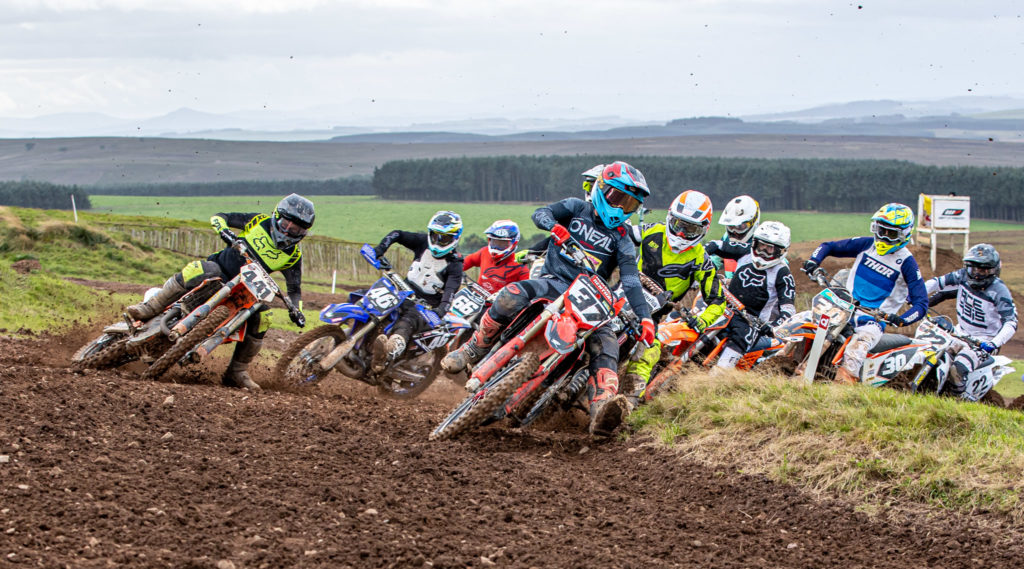 There were some welcome new riders to the series in the Adult Support, none more so than 2021 ACU British Women’s MX Adult Champion, Elaine MacEchern. Another new face Extreme Enduro rider, Stuart Mack. The pair enjoyed their battles with Vet rider Mickey Graham as the swapped positions on the podium of the first two races. Stuart Mack would run out second in both races as Mickey and Elaine would swap first and third. The weather took its toll as only five riders turned out for the third race.

In the O50’s, the top three were separated by 3 points as Graham Anderson beat Morton Hannah and Ian Wilson to secure the ScotMX O50’s Champion even though Ian Wilson won the final race.

Douglas Garrick was a lonely figure as he was the sole O60’s rider and ScotMX Champion.

Mikey Graham’s two races on Saturday stood him in good stead as he bagged all three race wins on the Sunday but he had to earn the wins as Alan Deans and Jason Moir would run in first  place in two of the races before Mickey got the better of them. They would run out top three with Jason turning his third in race one into two seconds. Alan ran behind Jason in the last two races for the overall third. Paul Carey got a special award from AMD for being their rider of the year and his three fourths were some consolation. Mickey Graham was crowned O40’s ScotMX Champion.

Never a dull moment in the Adult C class as the positions are too unpredictable to call. Josh Rea took the overall with one race win in race two. Race 1 winner, Lewis Kennedy won comfortably but that was his only result. Greg Farley’s poor race one was greatly improved by finishing third and first but not enough to catch Josh. Martin Lyell continued his return to racing with a second and third for the final third overall. Lewis Fleming did not figure in the overall top six, but he had enough of a lead coming into the last round to secure the ScotMX Adult C Championship. He was drenched in bubbly when he crossed the line down in 10th as the organisers popped the cork for his championship win.

Niall Macauley grabbed a couple of AMD Holshots and the overall win. He managed to fend off the persistent challenges of Stuart Mack and Josh Gray. Stuart did get the better of him in race one as he pushed from third to first in the last few laps as his enduro conditioning paid off but his bike blew in race three to ruin his chances of an overall. Josh Gray rode a tactical race in all three races as the 3,2,2 was more than enough for him to secure the ScotMX Adult B Championship ahead of Niall. Myles Reid rounded off the podium even without the top three position in any of the races.

The MX1 and MX2 race was combined at Duns and provided some very close racing. Ben Edwards and Kyle McNicol ran out winners of the ScotMX MX1 and MX2 Championships. They had led after Elgin, but Ben Kennedy had a slim chance to overhaul Kyle in the MX2 but with two race wins, Kyle did enough to secure the championship. In the races, Race 1 saw Kyle push Ben Edwards all the way eventually taking the race lead on the first corner after the chequered flag, a close pass but expertly done. Kyle pushed his 250f hard and had a DNF in race 2 as he was battling with Ben Kennedy and Ben Edwards. He briefly hit the front, but his bike failed. Ben Edwards showed why he won the MX Nationals Expert Class as he cruised in the final race. The MX1 podium was completed with Aiden Bruce finishing behind Ben and George Stewart in third. The MX2 saw Kyle drop out of contention with the DNF in race 2 as Ben Kennedy beat Steven Craig into second place and Jack Arthur with a well deserved third.

After a successful 2021 season, the ScotMX Scottish Championship, powered by Milwaukee, will return in 2022. Registration for ScotMX 2022 is available on the website now ! Go to www.ScotMX.comfor further information.

Be sure to Follow ScotMX on Facebook/Instagram for all your regular updates. 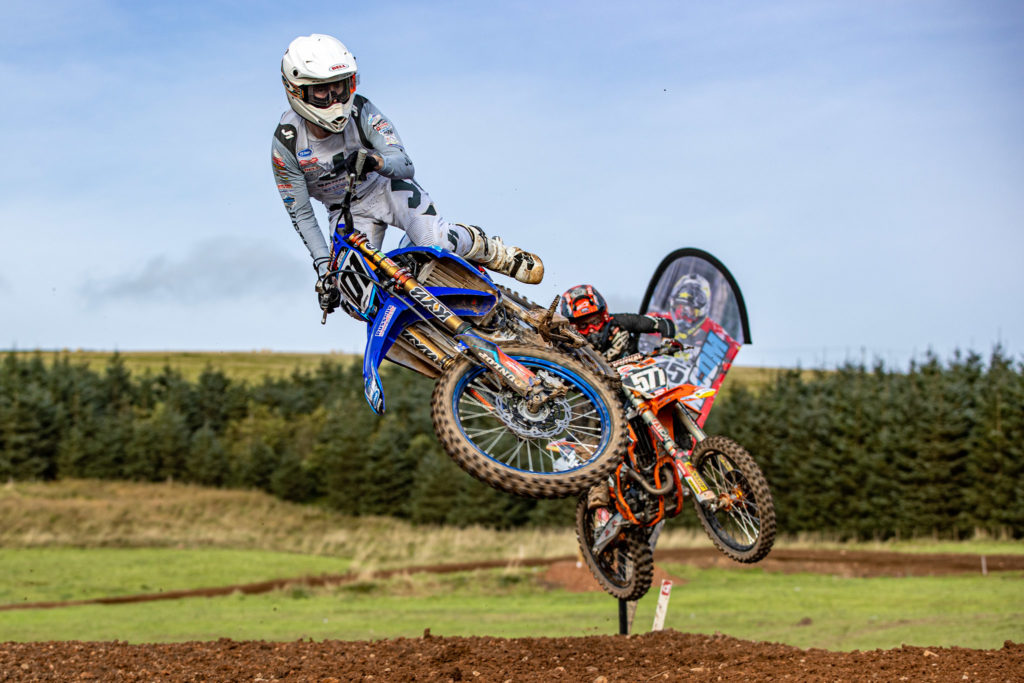