Skip to content
Richard Kerr and the AMD Motorsport team were back in the top ten in the Pirelli National Superstock Championship at the weekend with the Kilmacrennan, County Donegal rider taking an excellent eighth place in Saturday’s opening race at Donington Park. It proved to be a weekend of two halves though as he finished just outside the points in Sunday’s second encounter.
The weekend started positively for Richard and the team with good pace in Friday’s dry practice sessions but qualifying on Saturday was a much different proposition with rain and cold temperatures hitting the Leicestershire venue.
Staying upright was a challenge for everyone and Richard was one of many to take a spill but he managed to put in a good time around the 2.5-mile GP circuit to put the factory-prepared Honda Fireblade into 14th and on the fifth row of the grid.
Conditions worsened for the race, which was shortened from 14 laps to 12, but a solid start saw the 21-year old slot into 13th and he steadily moved forward for the remainder of the race. By half race distance he was battling with the Suzuki of Tom Oliver but Richard was back into ninth place on the penultimate lap and when Chrissy Rouse crashed out on the final lap, he was promoted up the order to eighth for his second best finish of the season so far.
Starting Sunday’s 14-lap race from the more advanced position of tenth, he slipped back to 12th on the opening lap and by half race distance, this had become 15th as he struggled to get the big Honda stopped going into the corners. It looked like he’d claim the final point on offer but Tom Ward got by him in the closing stages and he unfortunately missed out in 16th, brake issues preventing him from mounting a stiffer challenge.
Richard Kerr: “Conditions on Saturday were extremely tough and I had no feeling at all in qualifying, I highsided before I knew anything about it! I got an ok start in the race but got held up a bit by David Allingham which allowed the group ahead to get away. Once by him though, I was able to close the gap and had a good battle with Tom Oliver and Luke Mossey. We swapped positions a number of times but I made the pass stick and was delighted with eighth.”
“Starting from tenth in Sunday’s race, I was more than hopeful of another top ten finish but, unfortunately, I was encountering brake issues almost from the beginning. The lever came back to the bar on more than one occasion so it was a bit hairy at times and it was very strange as we’ve had no problems all weekend. It meant I just missed out on the points but Saturday’s result was certainly something to be proud of so a big thanks, as always to Fraser, Mary and the whole AMD Motorsport team.”
Fraser Dykes, Team Owner:’“It was a bit of a mixed weekend and a shame we couldn’t score points in both races but we’re over the moon with Richard’s eighth place in Saturday’s race. After the spill in qualifying, we had a bit of work to do to get the bike ready for the race but Richard put in a superb ride in very tricky conditions. Hopes were obviously high for Sunday but unfortunately the brake issues encountered early in the season re-emerged and the confidence was sapped a wee bit.”
“Everything’s very much heading in the right direction though and there’s only been two rounds where Richard hasn’t scored a point this season. He’s running consistently with the leading pack and proving week in, week out, that he has what it takes in the class. There’s only one round left now so we’ll be looking to end the championship on a high note.”
Pictures by Tim Keeton – Impact Images Photography
The final round takes place at Brands Hatch on October 15-17.
Pirelli National Superstock Championship standings (after 10 rounds)
1 Tom Neave (Honda) 238pts
2 Billy McConnell (BMW) 216
3 Alex Olsen (BMW) 215
4 Luke Mossey (Kawasaki) 196
5 Fraser Rogers (Aprilia) 194
6 Taylor Mackenzie (BMW) 188
17 Richard Kerr (AMD Motorsport Honda) 43 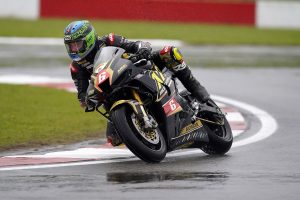 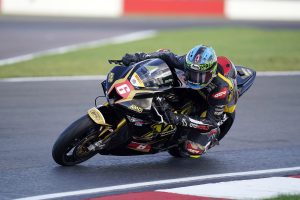 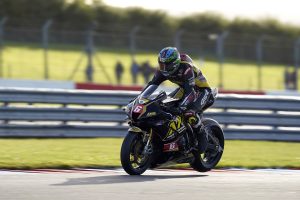